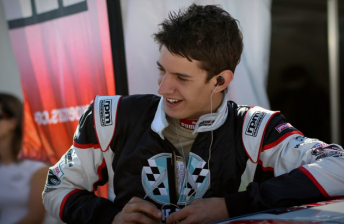 Nick Percat will start this evening's race from pole position

Thompson spent much of the session on top of the times, before Percat’s flier with three minutes remaining.

A mistake at the Turn 9 hairpin on his final lap ensured Thompson would start second, ahead of David Russell (Jayco Ford), Jack Perkins (Supercheap/BJTM Ford) and Tim Blanchard (Jayco Ford).

V8 Supercars returnee Jason Richards was a second away from pole in his Greg Murphy Racing Holden, and will start 12th, alongside team-mate Daniel Jilesen.

Drew Russell (Go-Karts-Go Ford) and Marcus Zukanovic (Midway Holden) both struck trouble during the session – stopping on the front straight.

Neither were able to continue, and will start 14th and 17th respectively.

Race 1 of the 2011 Fujitsu V8 Supercars Series gets underway at 6:00pm this evening.