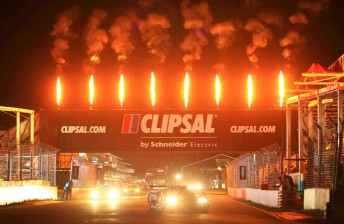 Klark Quinn has narrowly defeated Mark Eddy in a thrilling inaugural Murray Walker GT Tourist Trophy on the streets of Adelaide this evening.

After keeping close company in the opening stages of the race, the pair resumed their close contest after the entire field had completed their compulsory 60-second pit stop in the one-hour race.

The duo came across the Mosler of Ash Samadi with less than ten minutes remaining. With no radio, Samadi was unaware the leaders were trying to place him a lap down and valiantly defended his position.

This allowed Eddy to attack the Mosler and the pair ran side-by-side before Quinn held on to take the victory.

“I knew he would bring it home,” said father Tony Quinn, who crashed his Aston Martin DBRS9 out of the race at Turn 4 on the opening lap.

“He did a fantastic job and it was one of his best drives. Ash (Samadi) had no radio contact so he didn’t know it was the leaders coming up behind – but it made it exciting, didn’t it?”

Greg Crick took his Mopar-sponsored Dodge Viper GT3 to third place, dicing with the leaders early in the race before losing time to lapped traffic during the pit stop shuffle.

Dean Grant and New Zealand driver Daniel Gaunt were the first of the two-driver combinations home, their Porsche GT3 Cup S making it four different brands inside the top four at the end of the race. Ash Samadi was fifth in his Mosler and Andrew Taplin was a late charger through the field to score sixth outright.

Damien Flack survived a spin and the briefest of contact with the tyre barrier late in the race to score seventh outright, one position ahead of his brother Adrian who took the brand-new Ginetta G50 to a stunning top-ten finish on debut.

The result ensured the Flack family a 1-2 in the GT Challenge class, a result that will ensure plenty of celebrations from the brothers this weekend.

Lotus driver Angelo Lazaris finished ninth and Marc Cini tenth despite having to make two stops in his Hallmarc Porsche.

As is usual for the Adelaide street circuit it was a race of attrition, thirteen of the original 21 starters making it home.

The big-name non-finishers include the Allan Simonsen/Nick O’Halloran Maranello Motorsport Ferrari, which failed to complete a lap, and the sister Ferrari shared by Peter Edwards and Jason Richards who were sidelined by a broken wheel-speed sensor.

Supaloc Lambo driver Kevin Weeks’ race ended before the half-hour mark with a down-on-power engine, the Adelaide driver electing to park his car rather than risk damage with a car that was well off the pace.

Weeks’ had only just changed the engine prior to the race after his original unit struck issues.

South Aussie driver Jordan Ormsby also failed to make the chequered flag, after dropping huge amounts of fluids from the front of his Porsche onto the circuit just before the half-hour mark, making conditions treacherous for other competitors as it dried.

Ben Eggleston’s Aston Martin failed to make the start after losing an engine in qualifying.