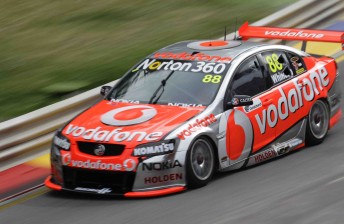 Jamie Whincup has ended today’s four practice sessions for the Clipsal 500 Adelaide as the fastest man.

Craig Lowndes (TeamVodafone) was third, the only other man in the 1:21s bracket.

Todd Kelly (Jack Daniel’s Racing) and Will Davison (Trading Post Racing) were next best in Practice 4, but on combined times with Practice 3, the pair dropped to fifth and ninth respectively.

Greg Murphy lost time in Practice 3 with a broken tailshaft.

Qualifying for Race 3 of the V8 Supercars Championship kicks off at 10.10am followed by the top 10 shootout at 11.40am.