It was a Ford Falcon trifecta in the first race of the 2011 Autobarn Touring Car Masters.

Bowe led early from pole but repeatedly proved vulnerable under brakes into Turn 9, while Abelnica capped an impressive debut for his new Falcon by passing Richards on the last corner of the last lap.

Andrew Miedecke was the big mover of the race, finishing ninth from the back of the grid after switching into his team-mate Bob Middleton’s Camaro after qualifying due to an engine failure in his own car.

Tony Edwards’s new Torana SLR/5000 continued its difficult debut, pitting on the opening lap with mechanical issues, while former champ Gavin Bullas will not compete in any of this weekend’s races after an engine failure yesterday.

Yesterday’s race winner David Sieders drove through from 18th to sixth, setting the fastest lap of the race on the final lap. 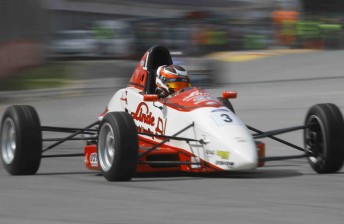 Waters took his first victory in the class by 2.6s, despite a Safety Car deployment ensuring a one-lap sprint to the flag.

Foster stormed through from 11th on the grid to finish second, with Liam Sager (Synergy Spectrum), Tom Williamson (Borland Spectrum) and Garry Jacobson (Sonic Mygale) rounding out the top five.