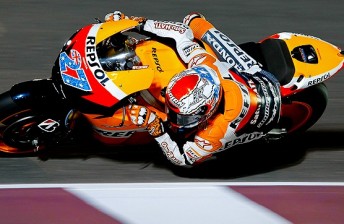 Repsol Honda rider Casey Stoner has jumped out of the blocks in the first practice session for the Commercialbank Grand Prix of Qatar at the Losail International Circuit.

The Australian brought forward his superb form from the pre-season tests, to the start of the Qatar race weekend and produced the quickest lap time of 1:5 752; six-tenths quicker than team-mate Dani Pedrosa.

Even better for Stoner is that he feels there’s plenty more to come.

“I did the whole session with the same rear hard tyre and I was happy with it from the beginning to the end, and this is good for the race.

“Finally the season has started, everything has gone fantastic so far but we need to be realistic and keep focused”.

All eyes were on the debut of Valentino Rossi (Ducati Team) riding on his Desmosedici GP11. After some disappointing performances in pre-season testing, he finished fifth, just being edged out by fellow Italian, Marco Simoncelli (San Carlo Honda Gresini Team).

The gap between second and eighth was just 0.230 seconds, showing how quick Stoner was and how close the competition is throughout the rest of the field.

The third Repsol Honda was Andrea Dovizioso who was 8th quickest and next, the Frenchman Randy de Puniet (Pramac Racing) in 9th position, who was making his debut for the team. The final place in the top ten went to American Colin Edwards (Monster Yamaha Tech 3).

MotoGP rookie, Cal Crutchlow (Monster Yamaha Tech 3) finished in 14th after a difficult pre-season test where had suffered a nasty injury to his finger.