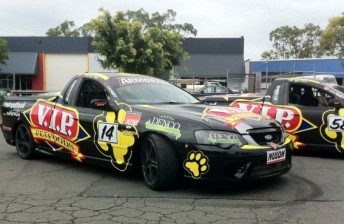 VIP Petfoods will have a major presence in at least three leading categories this season, with V8 Ute team Big Gun Racing the latest to receive backing from the Queensland company.

Experienced Ute campaigners Brad Patton and Ryal Harris are set to debut their new black and yellow colours this weekend at the Clipsal 500 in Adelaide.

The duo were two of 10 V8 Utes testing yesterday at Mallala, and believe they’re in for a strong season.

“This is going to be the best year on record,” said Patton.

“I’ve never been this excited about a year of motor racing.

“Our team is going to look sensational and I’m certain that this will be the best year yet both on and off the track.”

The sponsorship deal is an extension of an existing relationship between Patton’s family business, Big Gun Butches, and the petfood maker.

“For me personally this a natural extension for a professional relationship that has gone on for over a decade,” said Patton.

“We’ve already had a couple of very exciting test sessions.

“Ryal is already fast in his Falcon and I’m driving a brand spanking new XR8 after I destroyed last year’s car in a big crash at Surfers Paradise.

“I’m amped. I can’t thank Tony Quinn enough for this opportunity and I look forward to rewarding him with some great results both on and off the track.”

The new deal marks a return to V8 Ute racing for VIP Petfood, which sponsored Grant Denyer’s Falcon during the early years of the class.

First practice for the opening round of the 2011 Auto One V8 Ute Racing Series gets underway at 9:00am tomorrow morning.