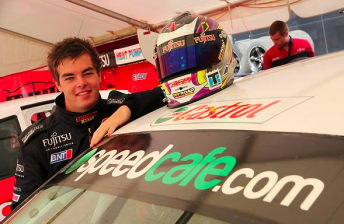 McLaughlin is returning to the Fujitsu Series for a second season with Stone Brothers Racing in the #93 Fujitsu-backed Ford.

The Queensland-based Kiwi has been busy racing in the BNT NZV8s Championship in recent months, taking his first race victory in the class at Taupo last weekend.

While less sophisticated and underpowered compared to the V8 Supercars, McLaughlin believes his time in NZV8s will benefit him this weekend, when he makes his first V8 Supercars appearance in Adelaide.

“I think some of these other guys haven’t raced since Homebush, and we’ve done five races in New Zealand prior to Clipsal,” McLaughlin told Speedcafe.com.

“So definitely race miles and being race fit before coming into such a gruelling event – it’s certainly a leg-up for me.”

McLaughlin’s win at Taupo saw him storm through from 15th on the grid in the full-reverse-grid Race 3, and leaves him ninth in points with one round reminaing.

“It was great, I was so happy to get my first win,” said McLaughlin of his achievement.

“It took a while to get and we went through a few ups and downs, but we got it and hopefully I can turn it into a race win in the Fujitsu Series this year.

“The NZV8s is a very competitive class, with the likes of Johnny Mac (McIntyre) and Kayne Scott, who is my team-mate and used to drive V8s over here.

“You’ve also got Angus Fogg, Craig Baird, Jason Bargwanna… it’s a hard field, so it was good to get some strong pace out of the car and get a win.”

McLaughlin completed a pre-season test in his Fujitsu V8 Supercar at Queensland Raceway, and is looking forward to a strong season.

“It felt good, the car ran around really well,” he said of the test.

“We did a few updates to the car over the off-season, so the aim this year is just to keep it on track and get some good consistent results at each rounds.

“I’m definitely aiming to run consistently and get my starts right, because that was really my weakness last season.”