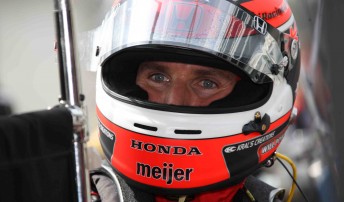 Australian Will Power has set the pace in the opening day of testing for the 2011 IZOD IndyCar Series at Barber Motorsports Park.

Power, who won five road/street races on the way to being the series runner-up last year, said

“It was a good day today for Verizon Team Penske,” Power said.

“We definitely found some things today that will help us here. The track conditions really improved late in the day before we decided to stop a bit early because of the rain. It felt really good out there and I hope it’s dry tomorrow so we can get back out and do some more laps in the Verizon car.”

Last year, the title went down to the final race between Power and eventual winner Dario Franchitti. Power predicts that the season will be even closer this year.

“I said yesterday that this would be the toughest season in history. I haven’t seen the timesheets yet, but it’s already shaping up to be that way,” Power said.

Seven different teams were represented in the top 10 of the combined time sheet for the two sessions, and the top 18 of the 24 cars participating were separated by one second.

Five more hours of track time are scheduled for March 15 in preparation for the season-opening Honda Grand Prix of St. Petersburg next week. Barber Motorsports Park will play host to the Honda Indy Grand Prix of Alabama on April 10.