Dane: Thompson is the perfect choice

Dane: Thompson is the perfect choice 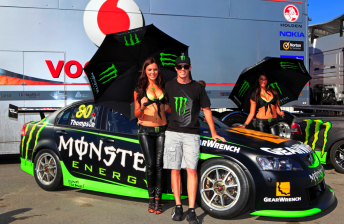 Thompson and friends at today's launch

The 23-year-old has two full seasons of V8 Supercars Championship competition under his belt, having spent 2008 with PWR and 2010 with Walkinshaw Racing.

In addition to his Fujitsu Series duties, Thompson will line-up alongside Triple Eight’s Jamie Whincup in the V8 Supercars Championship endurance races.

While Thompson had a disastrous 2010 season, finishing 30th in points, Dane sees the Gold Coaster as the perfect fit for his team.

“We feel that Andrew is the perfect choice for our first entry into the Fujitsu Series,” said Dane.

“He is experienced, has a level-head and knows what it takes to wrestle a V8 Supercar to race wins.

“He is very motivated and eager to make this opportunity work. He has battled with some uncompetitive rides in past years and this has only fuelled his motivation and work ethic more. Monster will add colour to this year's Fujitsu grid

“Andrew will drive with Jamie Whincup at the endurance races and we are certain the transition between two similar race cars will be seamless.”

The drive marks a return to the Fujitsu Series for Thompson, having competed in the series with Dick Johnson Racing in 2006, and Howard Racing in 2007.

Today’s car launch at Smiths Holden in Port Adelaide revealed the much talked about entrance of Monster Energy into V8 Supercars as a naming rights sponsor.

According to Monster Energy Athlete Manager Dave Ellis, the new deal is the result of an 18-month sponsorship review.

“We have had great success with Jamie Whincup at TeamVodafone and we look forward to working with Andrew Thompson and all of the team for 2011.”

Emblazoned on the bonnet of the #80 Commodore, the announcement of the sponsorship coincides with the introduction of GearWrench products onto the Australian market from April 1.