No blue oval badges for Perkins/Sonic

No blue oval badges for Perkins/Sonic Perkins and Sonic will not carry Ford’s famous blue oval badges on the #999 Falcon, instead displaying a white badge with Triple Eight Race Engineering’s logo on it.

The car that Perkins will race was originally built by Triple Eight in 2007, and with his eyes firmly set on winning this year’s title, Perkins says that the only way for him to win was to be in a Triple Eight-built car. Also, with his V8 endurance ride already sorted with Russell Ingall in the T8-built Supercheap Auto Commodore VE, the move to Sonic made sense.

“When I did the deal with Dude (Paul Morris) and Russell to drive the Supercheap Auto Holden at the enduros, I was desperate to get into a Triple Eight car during the year,” he told Speedcafe.com.au.

“We tried to make it happen in a Holden but Triple Eight simply don’t have enough Commodores around yet, so it’s a Triple Eight relationship as opposed to a brand situation.

“Triple Eight built the car so I figure that they deserve the badges!”

Perkins says that prior dealings with Roland Dane’s T8 squad, plus the fact that their chassis have won every championship since 2008, made the decision to drive for Sonic very easy.

“Last year when I drove with Russell at the Gold Coast 600, Roland and a few of the guys from Triple Eight were very helpful in getting me up to speed in the car,” he said.

“Their assistance that weekend really helped me getting my head around driving the T8 cars. I’ve always got on well with Roland, I have a tremendous amount of respect for him and his team, who are the benchmark in V8s.” 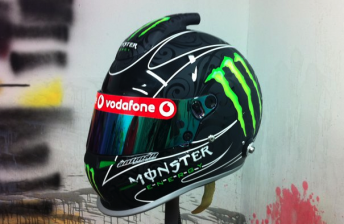 No pictures of the car yet, but here is a look at Andrew Thompson's Monster-supported helmet

New driver Andrew Thompson will take the covers off his black Holden Commodore VE that will feature sponsorship from Monster Energy and GearWrench.

Thompson will take the wheel of the Triple Eight Commodore that will make its debut on Adelaide’s street circuit this weekend.

The unveiling at the Smiths Holden dealership will take place at 4pm.