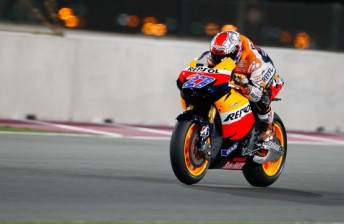 Repsol Honda rider Casey Stoner will go into this weekend’s opening round of the MotoGP season in Qatar as a firm favourite after beating team-mate Dani Pedrosa to top spot on the timesheets in the final pre-season Test at the Losail circuit.

The Australian struck the final psychological blow prior with a 1:55.681 just 0.064 of-a-second ahead of Pedrosa, who was the only other rider under 1:56 during the session. Stoner was also the fastest rider at the previous test in Malaysia.

The pair, who spent the five-hour second session finalising their set-ups for the Commercialbank Grand Prix of Qatar, which takes place at the circuit from Thursday to Sunday, were well clear of the rest of the field. Yamaha Factory Racing’s Ben Spies third over half-a-second down on Pedrosa as the American sought improved grip on his M1.

“By the look of the lap times everyone seems to have taken a big step forward,” said Stoner.

“We’re happy with what we’ve achieved again here and we can enter the race weekend with confidence but at the same time everyone else will be improving their set-up so we can’t relax.

“We found a good rider position which I’m really happy with, having moved my position more towards the rear in Sepang (Malaysia) – to try and find more grip, here we can run a more neutral set-up and everything seems to be working well. We did some more work on electronics tonight and also on the tyres, but generally worked in preparation for the weekend.”

The session got underway in difficult conditions with strong winds having dusted the track with a coating of sand, but after a slow start the riders began to adapt and competitive lap times were soon being laid down.

Marco Simoncelli (San Carlo Honda Gresini) closed the session with a best effort of 1:56.433, whilst Andrea Dovizioso (Repsol Honda) at just six-thousandths of a second behind made it four RC212Vs inside the top five on the timesheet as the latter Italian made headway with electronics settings. Randy de Puniet of the Pramac Racing team was the final rider to get within a second of Stoner’s time thanks to a late lap of 1:56.445, making him the highest-placing Ducati of the final day.

World Champion Jorge Lorenzo spent the session in a search of better acceleration in the lower gears, focusing on electronics and the swingarm on his M1. However, the defending World Champion ended up in seventh position. Close on his heels and also on an M1 was Colin Edwards (Monster Yamaha Tech 3), with Ducati Team rider Nicky Hayden and San Carlo Honda Gresini’s Hiroshi Aoyama completing the top ten and all within four-hundredths of a second of Lorenzo.

Valentino Rossi’s debut with Ducati this weekend is set to be a difficult one after he finished the session 13th. The Italian also had a crash at Turn 7 as his pre-season on the GP11 ended in a frustrating manner. His team-mate Hayden was one of a group of riders who fell inside the final hour.