GRM and DJR co-driver swap on the cards

GRM and DJR co-driver swap on the cards 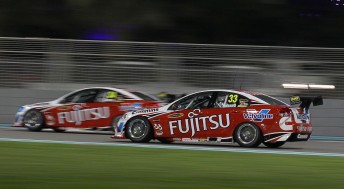 David Besnard, who drove with Lee Holdsworth in the #33 GRM Commodore last year, will soon be announced as Steve Johnson’s partner in the #17 DJR Falcon.

Besnard’s move has left GRM as one of the last teams to lock in its enduro line-up, and Marcus Marshall – Johnson’s co-driver last year – has emerged as the most probable man to slot into the Fujitsu-backed GRM team. 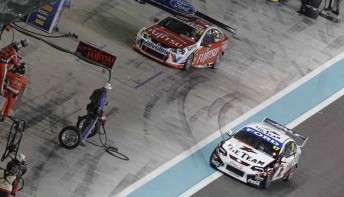 Team boss Garry Rogers was non committal, but admitted that Marshall was on his list of potential drivers.

“When the time is right, I’ll make a decision about that.”

At Bathurst last year, Besnard produced a blistering performance, and paired with Holdsworth, they emerged as the only combination capable of challenging eventual winners TeamVodafone.

Rogers confirmed that Ritter will be back, but says that there’s no guarantee that he’ll be driving with Caruso again.

“We don’t have driver pairings of any kind locked away,” he said.

“I definitely have Lee Holdsworth, Michael Caruso and Greg Ritter. We need to add one more for the traditional enduros, but who we pair with who, I haven’t even thought about that.

“We’ll weigh up the driver pairings until we see where the driver standings are closer to those events.”

Marshall, a former Carrera Cup, Champ Car and full-time V8 driver, told Speedcafe.com.au that he would relish the opportunity to drive with GRM.

“Driving for Garry’s team would be the best opportunity to win Bathurst, ever since I started driving in V8 Supercars,” Marshall said.

“I would jump at an opportunity I got to drive for his team.

“They have two great cars and two great drivers and either would be a chance at winning the race. But I don’t have any deal yet, so we’ll see how the next week pans out.”