V8 stars on show at Top Gear Live in Melbourne

V8 stars on show at Top Gear Live in Melbourne 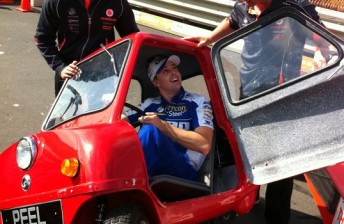 Mark Winterbottom and friends with the Peel car

Jeremy Clarkson, James May and Shane Jacobson have dropped the flag on the first ever laps of the custom-built Top Gear Live track at the Melbourne Showgrounds this morning, ahead of the opening shows of the Top Gear Live PROTOTYPE Tour.

The British hosts of Top Gear Live joined the Aussie co-host to wave off four V8 Supercar drivers – Craig Lowndes, Jamie Whincup and Mark Winterbottom – plus celebrity challenge participants as they learn the ins and outs of the 1.52km circuit which weaves through the venue.

The V8 stars will drive a selection of vehicles against the clock including an Arrow Kart and the Peel Car (world’s smallest production car) against the clock with the fastest combined time declared the winner.

A range of V8 drivers will take part in the event from this evening through to Monday lunchtime.

The celebrities will steer a Renault Clio against the clock on the same purpose built track.

The event is part of the motoring festival element of the Top Gear Live tour. The festival brings together everything automotive, including a range of displays and products.

Check out the video clip from today’s event.