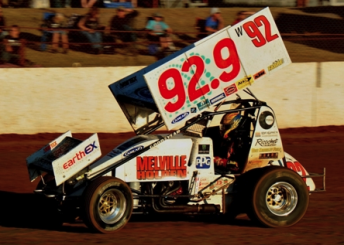 The Kendricks will be competing in Australia and America

Leading West Aussie Sprintcar team Kendrick Racing will be running operations in both Australia and America as of next weekend with the announcement they have exclusively signed Kerry Madsen to drive for them for the next three years.

Twelve months in the planning, the team will race up to 60 shows with Madsen in America, beginning next weekend with a two night swing in California at King’s Speedway (Hanford) and Thunderbowl Raceway (Tulare) respectively.

Team Principal Geoff Kendrick heads Stateside next week to oversee the operation, which will be headquartered at the home of Sprintcar racing, Knoxville, Iowa.

Two cars have been constructed under the watchful eye of American wrenchman, Sonny Kratzer, with another two underway. Come the height of the season in July and August, 19-year-old son of Geoff, Jason Kendrick will join Madsen in the team.

The well-known WA team owner and engine builder is negotiating to purchase a property in Knoxville to house the team.

“We have got enough parts to put together a competitive program and the goal is to step it up each year with the view of doing the full World of Outlaws season in the third year,” Kendrick explained.

“Putting together a team in America is something I’ve wanted to do for a long time and I believe translating what we’ve achieved in Australia to the USA will allow us to be very competitive, particularly with someone such as Kerry at the helm.”

The deal gives much needed long-term stability to Madsen – who could be considered somewhat of a journeyman throughout his career.

Kendrick becomes the first Australian since Reeve Kruck’s Titan Racing USA (which was based in Brownsburg, Indiana) to establish a full-time Australian team in the USA with a view to competing on the World of Outlaws trail.

Before attending to American duties though, both Madsen and the younger Kendrick will be in action at the Perth Motorplex this weekend.