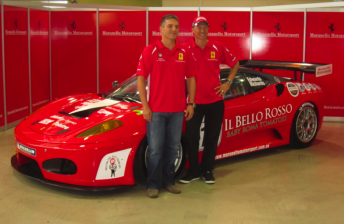 Edwards (left) and Richards pose with the 430 GT3

Jason Richards says that making his racing return in the Australian GT Championship at the Clipsal 500 will be “like therapy.”

The 34-year-old Kiwi officially announced this morning that he will race a Maranello Motorsport-prepared Ferrari 430 GT3 alongside car-owner Pete Edwards in the 60-minute Murray Walker Tourist Trophy on Friday March 18.

The Team BOC V8 Supercars driver has not raced since being diagnosed with cancer last November.

“It’s really great for them to help me through this, and give me the opportunity to co-drive with them in the enduro on the Friday night. I’m looking forward to just getting back to racing again.

“Part of this whole ordeal I’m having to go through is mental, as well as the obvious physical aspects of it, so for me it’s almost like therapy to get into a race car again. It’s my normal life coming back to me. Racing cars is who I am and it’s what I do.”

While Richards has driven Ferrari 430s at track days in the recent past, he will not get the chance to drive the #17 Il Bello Rosso entry until Thursday practice in Adelaide.

“Unfortunately when they’re testing at Winton I have to be in Sydney doing some medical checks, so I won’t be able to make it,” said Richards.

“So the first time I turn a wheel in that car will be at the Clipsal 500. But it doesn’t daunt me, they are very good cars.

“Ultimately I’m there for the enjoyment. While I will be as competitive as I always am, I’ll be there to have an enjoyable weekend’s racing.”

Under the race’s seeded driver rules, Richards will be allowed to complete a maximum of 30 minutes of Friday’s twilight race.

Edwards will then be the car’s sole driver in Sunday’s sprint race.