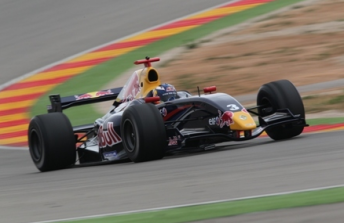 Australian Red Bull Junior driver Daniel Ricciardo is excited about the season ahead after topping the first Formula Renault 3.5 test of the year in Aragon, Spain.

The test marked the 21-year-old’s first day with Czech team ISR, having been narrowly beaten to the title last season with Tech 1.

Ricciardo is a firm favourite to go one better in 2011, where he will dovetail his racing season with Red Bull Racing and Scuderia Toro Rosso third driver duties.

“I’m very happy to be back in the car and excited about a new challenge with ISR,” said Ricciardo.

“Things went quite well today. This morning we mainly focused on the basics – getting comfortable in the car, getting the seat and pedals right.

“While that was important, it did mean that we didn’t get chance to do many laps in the first session.

“I feel really happy with our progress today, because as soon as we did do some flying laps we were immediately on the pace which is a good sign.

“I’m looking forward to some more laps tomorrow and continuing the progress we made today.”