V8 Supercars will have a major presence at the Top Gear Live Festival at Melbourne’s Showgrounds this weekend.

Each driver will do a lap in a Arrow racing kart, a production road car, with the finale, a lap in the infamous Top Gear ‘Peel’ car (smallest car in the world). 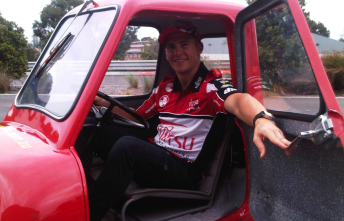 The driver with the lowest calculated overall time after completing the three laps will be crowned the winner and take possession of the Top Gear Live V8 Drivers trophy.

New dad Orrcon Steel FPR’s Winterbottom says that he is looking forward to some friendly fire before next weekend’s Clipsal 500.

“We’re here Friday night and have a bit of a challenge –  a little bit of friendly competition,” he said.

“It should be a bit of fun. Obviously the Top Gear brand is massive and to be associated with that is terrific. I’m looking forward to doing all of this in front of 20,000 people.”

Both Winterbottom and Holdsworth got to sample the Peel car today, testing its limits (and tipping it onto two wheels!)

Other ‘racing’ events at the Top Gear show includes a Renault Sport Celebrity Challenge on the 1.52km purpose-built track.