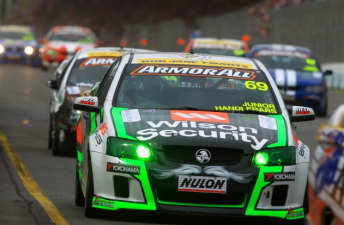 The Australian V8 Utes Series has a new title sponsor for the 2011 season.

The category has secured major support from automotive and accessories group Auto One and will be known as the 2011 Auto One V8 Ute Racing Series – protected by Armor All.

Each V8 Ute will feature the blue, red and white Auto One stickers across the rear windscreen of each of the 32 entries. The front windscreen will remain with Armor All branding.

Auto One CEO Peter Henry is pleased to have the two iconic Australian brands together.

“For over 20 years Auto One has provided the motoring public with the right gear and right advice, making Auto One an iconic Aussie business,” said Henry.

“We now join another Aussie icon in the Australian V8 Utes Series which is now one of the highest profile motorsport series in the Country. All Auto One members are very excited and are looking forward to a great year.”

Auto One has over 130 suppliers including current V8 Ute series partners Armor All, Nulon Oil, Disc Brakes Australia and Xtreme Clutches. This creates great synergies within the series for significant leverage and cross marketing opportunities.

Spherix’s Craig Denyer, category manager of the V8 Ute Series, is pleased with the new alliance.

“To have another significant company on board such as Auto One is again a real example of how strong and marketable the V8 Ute brand is, and how it has developed over the past 10 years,” Denyer said.

“This partnership will give offer some exciting opportunities to help grow both brands this year which will ultimately take the series to a new level.”

Former title backer Yokohama Tyres Australia will remain a major partner with the series, and are now in their seventh year as the official control tyre supplier.

The first round of the series will be held on the streets of Adelaide, supporting the Clipsal 500, on March 17-20.