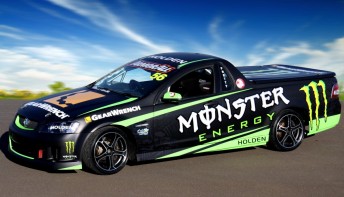 Nathan Pretty will make a return to full-time racing this year, competing in the Auto One V8 Utes Series with title support from Monster Energy Drinks.

The experienced V8 Supercars driver and 2002 Bathurst 24 Hour winner will kick off the season in the Monster Holden at the opening round of the season at the Clipsal 500. 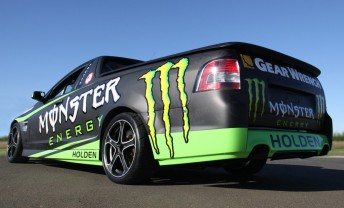 A rear view of Pretty's Ute

This will be Pretty’s first full series assault since the 2006 V8 Fujitsu Series when he drove the Smith’s Trucks-sponsored Commodore to a fifth place series finish.

Albury-born Pretty has amassed an enviable record over the past 15 years, competing at Bathurst 13 times for six top 10 finishes alongside his previous stints in the V8 Utes and V8 Development series.He was recently confirmed as Warren Luff’s co-drive for this year’s V8 endurance races in the Gulf Western Oils Commodore.

“I’m really looking forward to getting back out there and racing full-time again,” Pretty said.

“I have the Ute program and a V8 Supercar endurance drive for 2011 locked away so it’s been an exciting couple of months for me.

“The V8 Utes are a great category, I took part in the very first race in Adelaide 11 years ago so to be back involved in the series again is going to be a lot of fun – and I have some unfinished business in the class too.

“I’ve got a great sponsor in Monster Energy and the car looks fantastic.

“They’re a pretty cool sponsor to have on-board, they have a great brand and a very cool image and I’m really excited to be representing them.”

“Nathan is a proven talent behind the wheel and a very marketable guy out of the car so we couldn’t be happier to be supporting him in his return to the V8 Ute category,” Ellis said.

“Nathan is definitely a character and both he and the V8 Ute category really fit our brand to a ‘T’.

“We’re looking forward to seeing Nathan and the Monster Energy Holden at the front of the field in Adelaide and throughout the entire season.”