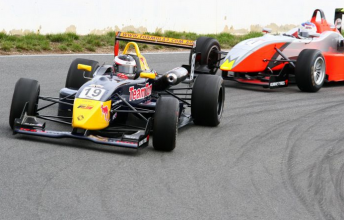 The Formula 3 Australian Drivers Championship will end its 2011 season with the V8 Supercars at Symmons Plains.

Confirmation of the Tasmanian event, scheduled for November 11-13, completes the seven round Formula 3 calendar.

Having run exclusively with the Shannons Nationals in recent years, the open-wheel class now has three slots on the V8 Supercars bill, with Symmons Plains adding to the previously announced races at Winton and Hidden Valley.

“This is the final piece in a complicated puzzle that was our 2011 schedule,” Formula 3 chairman Ian Richards said.

“Though its taken time, the series has ticked off several key criteria we wanted to fulfil, namely, making it as affordable as possible for every competitor and delivering more V8 Supercar events.

“With three V8 Supercar rounds and four with our friends at the Shannons Nationals, we think this is our most balanced and ideal schedule ever.

“We are looking forward to building a relationship with the V8 Supercar team and showcasing Australia’s fastest cars to their fan base.

“We really think we will add another level of entertainment to their events because our cars are fast, sound and look great, and provide great racing.

“It will be a building year for Formula 3, but for our long-term future this is going to be the ideal platform. We’re looking forward to another great season.”

The Symmons Plains finale will also incorporate the fifth running of the Tasmanian SuperPrix, won last season by Tom Tweedie.

The news confirms that Formula 3 will not be seen on the Queensland Raceway V8 Supercars support card, despite the category previously expressing its desire to attend the meeting.