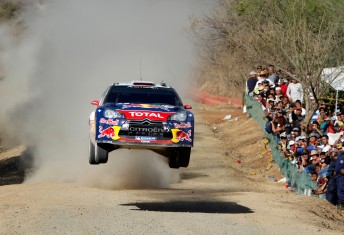 Sebastien Loeb has scored his first of the 2011 WRC

Sebastien Loeb has won the second round of the World Rally Championship, the Rally Guanajuato Mexico, after his Citroen team-mate Sebastien Ogier’s crashed out while in the lead of the event.

Loeb started the final three stages on Sunday 10.5-seconds behind Ogier. But when Ogier left the road 13 kilometres into the Guanajuatito test on Sunday morning, damaging his Citroen DS3 WRC’s front-left wheel in the process Loeb moved into to score his fifth win in Mexico and 63rd of his career.

“It was very hard to win because it was a big fight with Ogier,” said Loeb

“He was pushing me really hard. We are team-mates and we have to fight for the championship and it is a shame it ended for him like this. But I am happy with the performance of our DS3 WRC, it has been very fast on this rally.”

Mikko Hirvonen also benefited from Ogier’s exit to inherit second place in his Ford Fiesta RS WRC. The result means the Finn maintains his lead in the world drivers’ championship following his triumph on Rally Sweden last month. He ended the event by winning the Power Stage to secure three bonus points.

“Friday was difficult cleaning the road but when it was obviously we couldn’t consistently match the speed of the Citroens we just took it steady,” said Hirvonen.

“Getting three extra points is also good for the championship.

Jari-Matti Latvala completed the podium in his Fiesta and secured his second stage win of the rally with the fastest time on the penultimate test of the event.

Petter Solberg opted to carry one spare tyre in his DS3 WRC in an effort to give him the best possible chance of winning the Power Stage. After adopting a cautious approach on the first two stages to save his tyres, Solberg hoped the reduced weight in his car would help him take victory on the Power Stage. However, he was ultimately unsuccessful when he slid wide on a corner, allowing Hirvonen to take the best time.

Mexico rookie Mads Ostberg continued his impressive start to the 2011 season in fifth place in his M-Sport Stobart Fiesta. Following his extensive time loss with a puncture on day one, the Norwegian spent the remainder of the event fine-tuning his pacenotes.

Nasser Al-Attiyah had been credited with seventh but was disqualified during a post-race technical inspection click here for that story.

Federico Villagra fought back from his delays on Friday to bag the final WRC point on the first appearance of the season by the Munchi’s Ford World Rally Team, despite completing the final stage with a broken driveshaft.

An electrical fault halted Ken Block on the penultimate stage although he was eventually able to complete the run and make it to the finish.

Drivers Standings after 2 of 13 rounds

Manufacturers Standings after 2 of 13 rounds