Ford Performance Racing is close to confirming its Gold Coast endurance race line-up for the international-flavoured street race in October.

In the second FPR car, former Formula One driver Mika Salo is being tipped to drive alongside new team signing Will Davison in the #6 Trading Post Falcon.

Speedcafe.com.au spoke to team principal Tim Edwards, who would only confirm that he had not officially signed any driver. 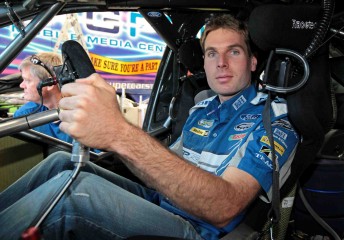 Will Power drove for FPR at the Gold Coast last year

“I’ve got the drivers sorted, but it’s only verbal agreements at this point,” Edwards told Speedcafe.com.au.

“I want to get pen to paper before I announce it, because as you know, things change.”

In most cases, teams are responsible for finding their own international drivers, although each guest needs to be approved by V8 Supercars Australia.

One driver certain not to return to the Gold Coast is Jacques Villeneuve. The 1997 Formula One driver drove with the factory team’s third car last year, partnering Paul Dumbrell in the #55 Bottle-O Racing Falcon.

According to sources, Villeneunve is “highly unlikely” to return to the Gold Coast race due to “unrealistic financial demands.”