Chad Reed on podium in Daytona

Chad Reed on podium in Daytona 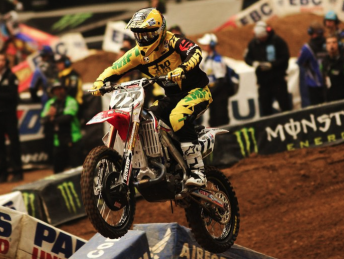 Chad Reed has moved to within one point of second place in the Monster Energy AMA Supercross series after scoring a podium finish in Round 9.

Reed’s TwoTwo Motorsports Honda greeted the chequered flag second behind the Kawasaki of points leader Ryan Villopoto, marking the Australian’s fifth podium since starting his own team at the beginning of the season.

Despite the strong points night, Reed admitted to being disappointed with his own performance at the Florida venue.

“I felt off tonight but I fought through to second and consistency is what wins championships so I’ll take it.

“I was disappointed I didn’t get off the line better and to be honest once I was out there I didn’t get going quick enough.

“I don’t know why – Daytona is one of my favourite races – its always a real racer’s track.

“It changes radically from lap-to-lap so you need to remain alert and not allow yourself to become complacent otherwise it can bite you.”