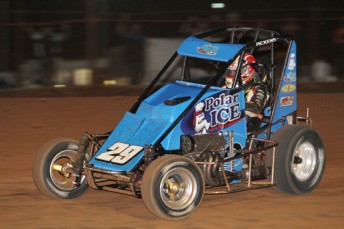 Kiwi Michael Pickens was the big winner at Tyrepower Sydney Speedway last night, snatching victory in not only the Speedcar Super Series Final, but also the series overall.

Coming into the event, Pickens trailed local hero, Troy Jenkins in the series pointscore. For the first half of the A-Main, Jenkins was looking likely to cement his position at the top of the tree, leading convincingly, before he was swamped by a group that included Pickens and Victorian, Harley Bishop.

Matt Smith then entered the equation, working with Bishop to clear out from Pickens. Bishop then spun giving Pickens time to re-group. He then chose the high line whilst Smith ran the bottom and the cushion was the place to run as Pickens proved.

Meantime, Jenkins ran low on fuel and drifted back to fifth at the chequers, securing Pickens the series victory.