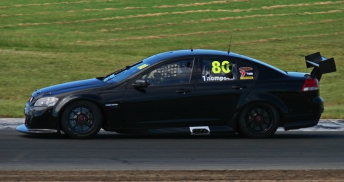 For the first time, Triple Eight Race Engineering boss Roland Dane has spoken about his team’s entry in the Fujitsu V8 Supercars Series.

Dane has confirmed to Speedcafe.com.au that Andrew Thompson will be the driver of the car in the first round of the series in Adelaide, with the team set to announce its plans for the rest of the season prior to Adelaide.

The successful team owner also hinted that the team could enter a second car in the Fujitsu Series at selected rounds for Australian touring car legend Mark Skaife this year.

Thompson, who is Jamie Whincup’s team-mate for TeamVodafone in the endurance races, spent yesterday and today testing the first of the team’s Fujitsu Series entries at Queensland Raceway.

“He went really well in the test and we’re looking forward to our team’s debut in the Fujitsu Series,” Dane told Speedcafe.com.au.

“We’re doing this for commercial reasons and for our driver development. Commercially it makes sense, and certainly it will help our endurance program. Hopefully we are going to be able to finalise Andrew staying in the car (for the full season).

“We’ll announce before Clipsal exactly what we’re going to do. We should be all clear by then.”

In regards to entering a second car, possibly for Skaife, he says it remains a possibility.

“There’s a chance, but I don’t know where that fits. It’s only a chance at the moment,” he said.

While Dane was pleased to talk about Thompson’s upcoming Fujitsu program, he continues to remained tight-lipped on the sponsor.