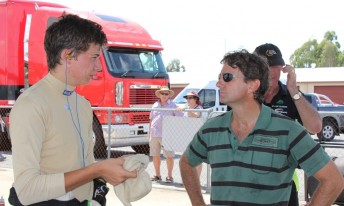 The two Formula Ford graduates will drive Ford Falcons for Miles Racing in this year’s Fujitsu Series, and benefit from Seton’s tuition throughout the year.

Seton was also present at Mostert’s first V8 Supercars test with the Miles team at Queensland Raceway last June, and expects the team to be competitive this season.

“My first impression is that Chaz and Ash have a bright future ahead of them,” said Seton.

“Given they mainly ran older rubber (tyres) their times were very competitive.”

Mostert, who impressed in a on-off Fujitsu Series outing at Bathurst last year, said Seton was a valuable asset to the team. “Having someone with some much experience and knowledge like Glenn around makes a huge difference when you’re at a test day like today,” said Mostert.

“You can come in and share what you’re experiencing in the car and he totally understands where you’re coming from … if something’s not quite right he’ll offer up some options from a driver’s perspective that might not be evident to an engineer.

Seton will not join Miles Racing for the full season, due to his commitments in the Touring Car Masters series.