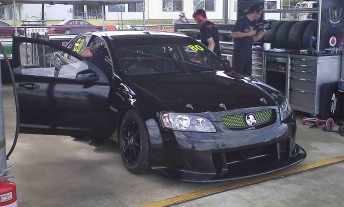 The first pics of the all-black Triple Eight-built Commodore VE, set to be run by Andrew Thompson in the Fujitsu V8 Series

The champion V8 Supercars team is at Queensland Raceway today, conducting a two day test, with both the black car and the team’s Vodafone-backed Commodores at the track.

The all-black Commodore was spotted at the Ipswich circuit by a Speedcafe reader (with a nose for news) who sent the images to us.

The car is plain black, appearing with a green grill, hinting towards a potential major sponsorship with Monster Energy Drinks.

The popular energy drinks company has been linked to the team for the past few years, with lead driver Jamie Whincup enjoying its support as one of its official sports ambassadors. 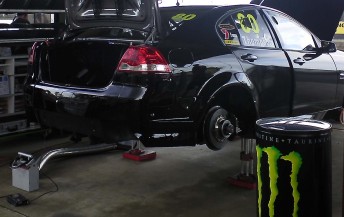 Appropriately placed fridge? Monster Energy Drinks has been a supporter of T8 for the past few years

Speedcafe.com.au contacted team boss Roland Dane who did not want to comment on the car, sponsor or driver, preferring to remain tight lipped until an official team announcement.

Triple Eight’s commercial manager Peter Jamieson also would not comment on the colour of the car’s grill and its link to Monster. He joked that we could be getting Monster’s green confused with Speedcafe.com.au ….

The team is set to make its debut in the Fujitsu V8 Series this year, with the team’s recently announced endurance driver Andrew Thompson pencilled in as the driver.

Thompson will team up with Jamie Whincup in the #88 TeamVodafone Commodore VE at the Phillip Island and Bathurst endurance races, while the #888 sister entry of Craig Lowndes will be paired with Mark Skaife.