The car that Fabian Coulthard rolled spectacularly on the first lap of the 2010 Supercheap Auto Bathurst 1000 has been resurrected and will have a new purpose in life this year.

The Holden Commodore VE chassis will become the team’s King Gee Pitstop Challenge car, used to give fans of the sport a chance to test their skills at changing wheels in a simulated pit stop.

Punters work through a series of events to select the best and quickest at changing wheels during a pit stop. An event final will be held ehere the fastest wheel changers from the public will be pit against the Walkinshaw Racing team members.

The King Gee Pitstop Challenge will attend six key V8 Supercars events across the season, including the next event at the Clipsal 500 in Adelaide.

The King Gee Challenge was run last year by Paul Morris Motorsport before the work wear brand switched its sponsorship to the factory Holden team. 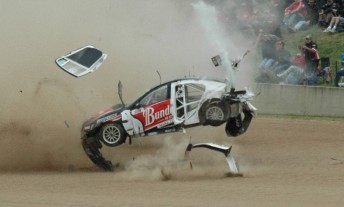 “We thought it was a good way to get a lot of people access to the car. There’s a huge amount of interest in it,” he told Speedcafe.com.au.

“We’ve rebuilt it to the point that it’s suitable for the challenge, but to be honest, it could be raced again if we really want to.

“We were very fortunate in regards to the way the accident occurred (rolling over). The car could be raced, but this year, its mission in life is to be in the Pitstop Challenge. It will have a lot of interested people, for sure.

“We’re expecting a lot of people to be interested and involved in the Challenge.”

The next round of the V8 Supercars Championship will be held at the Clipsal 500, Adelaide, on March 17-20.