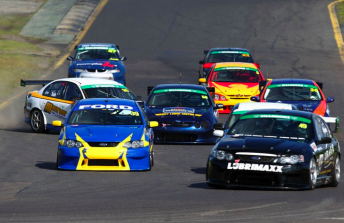 The Kumho V8 Series will be bigger than ever this year

The Kumho V8 Touring Car Series looks set for a bumper 2011 season, with fields in excess of 20 cars expected at all five rounds.

A total of 18 competitors have nominated for the full schedule of events, while a further seven are expected to make sporadic appearances.

The field will include multi-car efforts from former Fujitsu Series teams Fernandez Racing, Sydney Star Racing and Image Racing, in a major turnaround from the four-car grid seen at the opening round last year.

“Introducing the BA Falcons and VY Commodores last year has really made a big difference.

“V8 Supercars and CAMS have allowed us to convert BFs to BAs and VZs to VYs under special circumstances, which has given us a lot more cars.

“There just weren’t as many of the older cars (EB-AU Falcons and VP-VX Commodores) around as we’d originally hoped.”

The technical regulations remain stable for 2011, while the BF Falcons and VZ Commodores will join the eligibility list next year.

With the help of new naming rights sponsor Kumho, entry fees have been reduced to further entice competitors, while a trophy has been introduced for the highest placed ‘old model car’ (pre-BA and VY) at each round.

An end-of-season trophy for the highest points scorer under 25 years of age will also feature, with Curkpatrick explaining that the series aims to cater for any driver that wants to run a car.

“We always said from day one that it’s a place for young drivers to learn how to drive these cars, as well as for the older guys to keep racing,” he said.

“It’s always been that way and I think it will continue to be a mixture of competitors in the future.

“It’s good because the older blokes help the younger blokes, and while it’s very competitive, it’s very co-operative as well.”

The 2011 season will see a pair of ‘heritage liveries’ compete, with Steve Ingwersen and Steven Voight set to run Castrol and Valvoline colours on their Perkins Engineering and Garry Rogers Motorsport-built Commodores respectively.

The series kicks off with the Shannons Nationals at Wakefield Park on April 1-3.