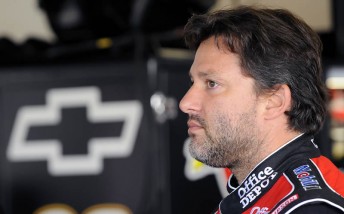 Craig Lowndes is not the only tin-top driver set to drive a Vodafone McLaren-Mercedes Formula 1 car, with NASCAR star Tony Stewart set to get his first taste of F1 power at the Watkins Glen International road course in the United States later this year.

In a similar ‘car swap’ demonstration to the one performed by Jamie Whincup and Jenson Button at last year’s Formula 1 QANTAS Australian Grand Prix, Stewart and McLaren driver Lewis Hamilton will swap machinery at the New York State venue, which used to host F1 Grands Prix and is now one of only two road courses on the Sprint Cup schedule.

The Stewart-Hamilton demo, which comes about through mutual sponsor Mobil 1, is similar to the plan currently being finalised by Vodafone for Lowndes and Button at the Mount Panorama circuit in Bathurst, New South Wales for Tuesday 22 March. CLICK HERE for Speedcafe.com.au’s latest report on the Bathurst demonstration.

Mike Arning, PR representative for two-time Sprint Cup champ Stewart, confirmed to ESPN.com reporter Marty Smith over the weekend that plans for the demonstration were advancing.

Back in 2003, Jeff Gordon and Juan Pablo Montoya performed an F1/NASCAR exchange at the Indianapolis Motor Speedway road course.

After losing his seat at McLaren several years later, Montoya switched to NASCAR and now races for the Earnhardt-Ganassi Racing team.