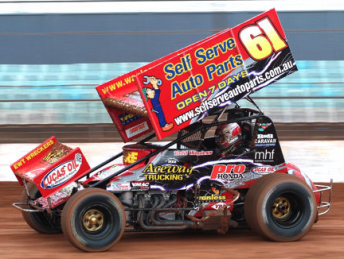 Todd Wanless took out both the Sprintcar and Midget features at Brisbane International Speedway on Saturday night. He was the man to beat from the outset and led flag to flag in both features – 55 laps in total.

The Midget win was his fourth from as many starts in the Polar Ice Series and fifth of the 2010/11 season, the Sprintcar victory his second of the KRE Race Engines Track Championship. He moves further ahead in the Polar Ice points and comes back into contention in the KRE Series with eight rounds remaining.

Wanless defeated Jeremy Hassell and Brock Dean in the midget feature. He looked a winner from the green flag and the race was then between Hassell and Dean for the minors. Adam Wallis, who set fastest time and then flipped the #20, recovered to come from the sixth row to fifth at the flag behind Robert Stewart.

In the Sprintcar A-Main, Wanless had to work hard on the opening lap to obtiain the lead from pole-sitter, Andrew Scheuerle. Amazingly, that opening lap was the fastest of the 30 lap journey.

Scheuerle trailed the leader for the opening two laps before Darrell Hodges slipped by and took up the chase. Hodges had some chances following a couple of cautions that put him right back on the rear of Wanless’ ABC Auto Gear Racing J&J but he was soon under fire from Danny Reidy who roared into contention late in the race after starting from the outside of row four. Reidy took over second with five to go but Wanless was too far ahead for the former Northern Territorian to bridge the distance.

Third across the line was Terry Bracken, who like Reidy made a charge through the field from a mid-pack start to finish on the podium, with Hodges falling to fourth and Scheuerle fifth.