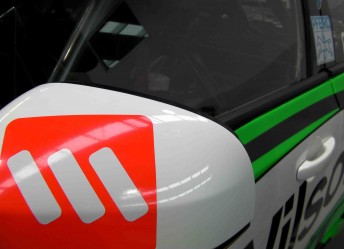 This is a rear view mirror, door and door handle. But is it a Ford or a Holden?

Wilson Security Racing has taken delivery of its new race car that is set to be launched this Friday in Melbourne.

The #3 entry, to driven by Tony D’Alberto, will be launched at the end of this week at Southern Cross Station in Melbourne – one of Wilson Security’s biggest clients in Victoria.

The car unveiled will be a Ford Falcon FG, built by Ford Performance Racing.

D’Alberto switch to Ford will be a first for his team who have campaigned Holden Commodores since setting up his own Fujitsu V8 Series team in 2005.

D’Alberto explained that V8 fans are welcome to join the team for its launch.

“We’re just giving you a sneak peek of the car,” he told Speedcafe.com.au. D'Alberto in his Commodore VE at the Yas Marina Circuit

“The whole car will be launched on Friday. We can’t give it all away at this point.

“This is just a tease. If you want to see the whole thing, you will have to come down to Southern Cross Station this Friday morning.”

The launch of Wilson Security Racing’s new car, colour scheme and team make-up will be held this Friday (4th) at Melbourne’s Southern Cross (formally Spencer Street) Station at 10am.