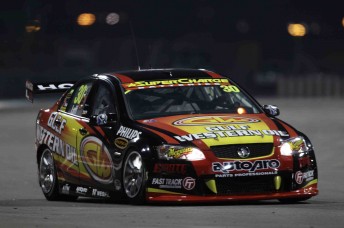 Nathan Pretty will return to Mount Panorama for the 14th time to drive alongside Warren Luff in the #30 Gulf Western Oils Commodore VE.

Pretty will drive in both the L&H 500 Phillip Island and the Supercheap Auto Bathurst 1000.

The 37 year old is looking forward to driving with the Victorian-based team again.

“I’m absolutely rapt to be able to continue on in the Gulf Western Oil Commodore,” he said. “To have a drive locked away this early in the year and then to be able to get some testing in through the year is fantastic for me and for the entire team.

“We were really unlucky last year with that late race safety car, but the team showed in their first Bathurst how good a job they do.

“It’s a fantastic opportunity for me to drive alongside Warren and with the team having another year’s experience under its belts I am sure we’ll be able to figure prominently in the results.”

Team owner Lucas Dumbrell was thrilled to be able to retain the experience of Pretty.

“Nathan is a proven endurance driver who did a really great job for us at Phillip Island and Bathurst last year – he knows the car and the team, and we are happy to have him back in the Gulf Western Oil/Autopro Commodore,” Dumbrell said.

“To get our driver line-up sorted so early in the year puts us in a much stronger position than last year.

“We’ll get Nathan into the car at the test days as much as we can so he’s fully prepared and ready to go when the enduros roll around.”

Luff and Pretty will test the Gulf Western Oil/Autopro Commodore at Winton Motor Raceway in Victoria tomorrow ahead of the next round of the V8 Supercars Championship at the Clipsal 500 on March 17-20.