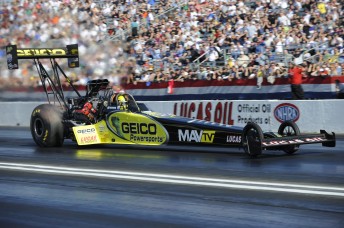 Morgan Lucas opened the year in style at Pomona

Morgan Lucas has led the winners at the opening event of the NHRA’s 60th Anniversary season – the Kragen O’Reilly Auto Parts NHRA Winternationals.

After enduring on-again, off-again weather in three days of qualifying, fans at Auto Club Raceway at Pomona were treated to spectacularly clear weather conditions and exciting competition, pitting both fierce rivals and friendly teammates, that had the drama level ratcheted high.

Fans also witnessed some great performances over the course of the four-day event, including the fastest Fop Fuel speed (327.03mph by Tony Schumacher) and second quickest pass (3.770-seconds, Larry Dixon), both of which were new national records, plus the fourth fastest Top Fuel speed (324.98mph, Dixon); the third and sixth quickest Funny Car e,t. (4.015-seconds by Cruz Pedregon and 4.023-seconds by Matt Hagan); and the third fastest Pro Stock speed (212.43mph by Erica Enders).

The Top Fuel final boiled down to teammate Morgan Lucas and Shawn Langdon, who were racing for just the fourth time, and for the first time in the final. Lucas had won the previous three battles between the former high school classmates – two last season and one in 2009 – and won this one as well with a 3.83-seconds in his Dickie Venables-tuned GEICO dragster after Langdon’s engine went sour at the finish line after he had grabbed a nice starting-line advantage.

“I’ve never been in the points lead in Top Fuel before, and I don’t really even know how to feel right now,” said Lucus.

“We were really fortunate in 2009 to get three wins, then we went on a big drought last year in 2010. I think as a team we’re really going to appreciate this day and just enjoy it because, you know what, who knows when the next one is going to happen?

“The thing about it is this is probably one of the most special races there is. In my eyes, it’s here, Gainesville, Indy, and the Finals. Those are the races that if you’re going to win one, those are the ones you want to win, and maybe a little, in a selfish way, the Lucas Oil Nationals in Brainerd just because of family.”

Lucas, who hadn’t been to a final round since the 2009 Memphis event, which he won, barely escaped round one with a 4.25-seconds after Brandon Bernstein smoked the tires, but stepped up to a 3.858-seconds in round two to defeat Terry McMillen, who had upset low qualifier and defending event and national champ Larry Dixon in the first stanza. Lucas then reached the final, the ninth of his career, by taking down Del Worsham — making his return to the class – on a 4.04-seconds to 4.12-seconds count in the semi-finals. Lucas, who lost his first five Top Fuel finals before finally scoring at the 2009 event in Atlanta, also has 11 wins in the Alcohol Dragster class.

It was a classic John Force Racing versus Don Schumacher Racing final round in Funny Car, as the two mega teams that battled for the championship last November in Pomona returned to contest the opening race of the new campaign. The heartache continued for Matt Hagan as Robert Hight beat him on a final-round holeshot, 4.056-seconds to 4.023-seconds, for his 19th career win.

Local hero Hight, who reached the Winternationals finals three straight years –sandwiching wins in 2006 and ’08 around a ’07 runner-up — reached the final again with his Jimmy Prock-tuned Automobile Club of Southern California Mustang, his 32nd career money round. Hight defeated Ford stable mate Bob Tasca III in round one, then took out his boss, reigning world and event champ John Force in the semi-finals, 4.10-seconds to 4.12-seconds. Hight then defeated another two-time Winternationals winner, Ron Capps, in the semi-finals, 4.070-seconds to 4.079-seconds.

Jason Line, who qualified just 11th with his Summit Racing Equipment Pontiac, found new life on raceday, reeling off amazingly consistent passes capped by low e.t. of the meet, 6.529-seconds at 211.89mph in the final round to defeat Greg Stanfield for his 22nd career win and his first since last year’s Gatornationals. A Summit Racing car has now been in the final at each of the last six Winternationals and in seven of the last eight, with six wins, four by Anderson and two by Line.