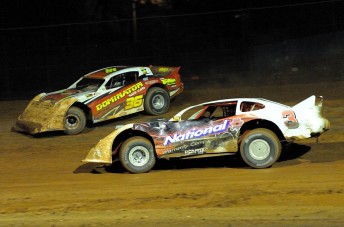 Kane surged to victory in the stoppage ridden affair – after at one stage dropping back to fourth. Former National Champion, Jamie McHugh was leading the way, before he dropped a tailshaft just past the midway point.

Victorian Mick Nicola was the man looking most likely with 10 laps to go, he was fairly comfortable out in front.

Kane’s Dominator chassis came into its own late in the race and he wound it on around the outside to take victory in the Grand Final – the first time an NSSS event has been run in Sydney.

Tasmanian – Jarrod Harper – who always performs solidly on the National stage, worked his way forward from 11th on the grid to complete the podium. Queenslander, Des Korn finished fourth in front of South Aussie, Shane Best.