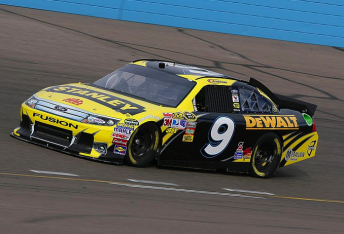 Marcos Ambrose has described his first race on a one-mile oval with Richard Petty Motorsports as a “good learning experience.”

Ambrose was relieved with the result, after being caught up in an early wreck in last weekend’s Daytona 500.

“We got a finish,” he said of today’s race, where he ran as high as fourth early.

“We got in a hole after Daytona and we just had to finish today.

“It was a good first day and a good learning experience with (crew chief) Todd Parrott.

“I know I’ve got great stuff and I know I can really do well, we just had to get a start somewhere and today was a pretty good start.

“Our communication was really good.  We stayed calm and I felt fresh in the car – we’ve got a good vibe going.

Ambrose dropped off the lead lap during the race, and was denied the chance to un-lap himself due an ill-timed final caution.

“We had one bad run and it was a long one where we went a lap down,” he said.

“It happened towards the end of the race and we just couldn’t get it back.”

Ambrose sits 27th in the points standings after two races.