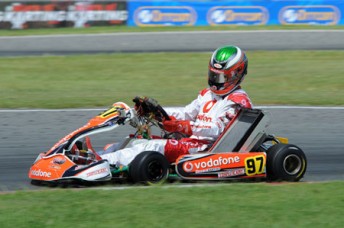 Vodafone Junior Development driver Chris Hays leads the way after the opening day of competition in the 2011 CIK Stars of Karting Series in Ipswich, Queensland.

While it was Ipswich’s Scott Auld who stole the show during qualifying aboard his G Developments-backed MS Kart in the Pro Gearbox (KZ2) category, Hays took the victory in all three heat races contested today and secure pole position for tomorrow’s opening 25-lap final.

“Tyler (Greenbury) was right there with me in the heat races but my Tony Kart was working really well towards the end of the races and I managed to get a gap over the final couple of laps,” said Hays.

“I was in a similar position last year but didn’t finish the job off due to a couple of mistakes, I just need to drive smart tomorrow and get as many points as possible for the championship.”

A pair of second places in the heat races secured Auld a spot on the outside of the front row for tomorrow’s opening final.  Toowoomba’s Tyler Greenbury, who pressured Hays during the opening two heat races today, and defending champion Matthew Wall will start on row two.

Fothergill was the dominant force in the Pro Light (KF1) category with the defending champion showing the field a clean pair of heels all throughout the day aboard his Tracksa-backed Kosmic kart.

In the Pro Junior (KF3) ranks Plumb was Mr Consistent all throughout the day with the Birel pilot taking the win in heat two and finished runner-up in the other two 15-lap heat races.

Defending series champion Pierce Lehane won two of the three races contested today, however, a fifth placing dropped him to the outside of the front row for tomorrow’s grid.