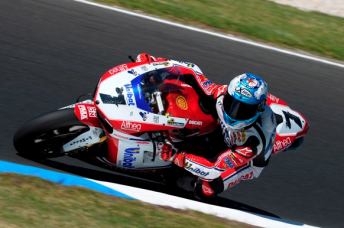 Carlos Checa has set the quickest lap ever recorded around Phillip Island on a Superbike to take pole position on his Ducati 1098R ahead of tomorrow’s opening round of the World Superbike Championship.

The Althea Racing rider set a blistering time of 1m30.882s, securing the first Superpole trophy of the 2011.

Checa, who won one of last year’s races at the Phillip Island circuit, was just a fraction ahead of Max Biaggi (Aprilia Alitalia) who put in a quick lap towards the end but who was edged off the top slot by 0.013 seconds.

Another Australian, Kawasaki rider Mark Aitchison, will start his first full season in World Superbike competition from 22nd and last.