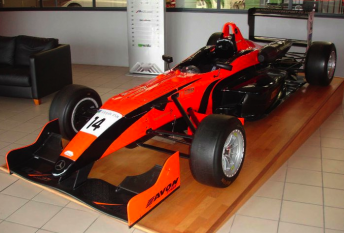 French chassis manufacturer Mygale is set to be represented on the 2011 Australian Formula 3 grid.

The car is expected to arrive within four weeks, and be race-ready in time for the 2011 season opener at Winton in May (CLICK HERE for separate story).

“I think the car is going to get a lot of attention,” said Mills.

“It looks more like a Formula One car than other F3 cars in Australia and it will be great to have something different in the series. I can’t wait to get the car here and get behind the wheel.

“The Mygale Formula Ford I drive is a fantastic thing and the brand has a great reputation, so I’m looking forward to seeing what the Formula 3 car is like.

“The main reason I’m doing it is because it’s something different and unique, which is really exciting for me personally and for Australian Formula 3 as a whole.”

It is expected that Mills will only run a part-schedule in his Mercedes-powered Mygale, as he dovetails his Formula Ford and Formula 3 commitments.

The M-07 chassis is the same generation as the F307 Dallara currently competing in Australia.

The Mygale features a dramatically different look to the dominant Dallara, with a lower, more pointed nose and a tightly sculpted engine cover amongst other aero and mechanical differences.

The M-07 scored several top-five finishes in the 2007 British Formula 3 Championship in the hands of Michael Devaney and Esteban Guerrieri.