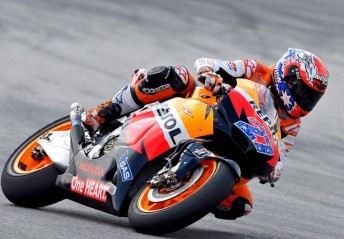 Casey Stoner led a Honda foursome at testing at Sepang

The third and final day of the second pre-season MotoGP Testing at Sepang has concluded with Australia’s Casey Stoner completing a dominant performance leading team-mate Dani Pedrosa, as both Honda riders broke the two-minute barrier in Malaysia for the first time.

After breaking Valentino Rossi’s 2009 track record on the second day, Stoner set the new benchmark of 1:59.665 as the Australian continued his impressive switch to the RC212V in the lead-up to the 2011 campaign.

It was a notable Test for the Honda in general and the RC212V filled the top four positions on the final day. Pedrosa’s best time was 1:59.803 as both riders spent the Test comparing chassis options and working on braking stability.

Marco Simoncelli, fastest three weeks ago, was third with a best time of 2:00.163 and the San Carlo Honda Gresini man was satisfied with his performance on both hard and soft tyres across the entire three days. The outstanding issue for the Italian remains edge grip. Third Repsol Honda rider Andrea Dovizioso was the final rider to get within a second of his team-mate Stoner, posting a fastest time of 2:00.541.

Following the quartet of Hondas were a trio of Yamahas, with factory team rider Ben Spies the highest placing M1 on Thursday in fifth position. Concluding his day early due to some remaining effects of his late crash the previous day, the American focused on electronics and chassis work in the morning, timing in with a 2:00.678 to close the day at 1.013s off Stoner.

Monster Yamaha Tech 3’s Colin Edwards also finished up early on day three but not before registering a best time of 2:00.966, placing him just ahead of World Champion Jorge Lorenzo. The Factory Yamaha Racing rider is still adamant that the M1 requires more power to be able to match its rivals, and his 48 laps on Thursday produced a best time of 2:01.003 that was just over 1.3s off Stoner’s benchmark.

Álvaro Bautista occupied eighth spot as he topped a trio of riders preparing for their second season in the premier class. The Rizla Suzuki rider finished ahead of Hiroshi Aoyama, who escaped a crash at Turn 9 without problems, and Héctor Barberá who was the highest placing Ducati on the final day on his Mapfre Aspar machine which had a new fairing.

Returning to action after his enforced absence through illness the day before, Valentino Rossi put in 59 laps on his factory Ducati as he sought the maximum out of the final day. The Italian ended 11th on the timesheet with a time of 2:01.469, an effort matched by his team-mate Nicky Hayden and which left the pair 1.804s from the top. The American appeared to have resolved the bulk of the problem he had with chatter on his GP11, but still has a remaining issue in turning.