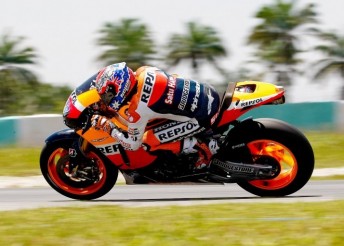 Australia’s Casey Stoner set the fastest ever time aboard a MotoGP machine at the Sepang Circuit in Malaysia as he led a Honda trifecta at the top of the time sheet on the second day of pre-season testing.

Stoner, Dani Pedrosa and Andrea Dovizioso were the three fastest riders on Wednesday, with the first two riding under Valentino Rossi’s 2009 circuit best lap record. The Ducati rider was unable to take to the track due to illness.

With the heat having intensified and the track temperature reaching over 60ºC at one stage, the riders and teams worked hard to make the most of the second of the three days. After Pedrosa had already bettered Valentino Rossi’s 2009 Sepang circuit best lap by almost three-tenths with a 2:00.229 in the morning, Stoner stole the best time with his 42nd and final lap of the day, registering a 2:00.171 and heightening expectations that the two-minute barrier could well be broken later today Australian time if conditions permit.

“We spent 90% of the day on one bike trying different configurations, changing the geometry to get the new fork working with the bike but didn’t find anything that felt really good, but these things are necessary to do before the start of the season,” said Stoner.

“We found the new forks to be quite amazing in the braking points, in hard breaking I didn’t need to use half as much pressure and I was able to stop for the corner much quicker, but found a lot more chattering in the last part of the corner.

“We managed to reduce this but we just seemed to lack the extra feeling that the alternative forks were giving.”

With Stoner and Pedrosa having taken the top two spots Dovizioso slotted into third with an effort of 2:00.531, whilst Yamaha Factory Racing pair Ben Spies (2:00.824) and World Champion Jorge Lorenzo (2:00.931) were the final two under 2:01 for the day as they placed their M1 machines inside the top five. Spies’ day ended with a non-consequential crash at Turn 7.

A notable absence on day two was Rossi, who was eventually unable to ride at all on Wednesday due to illness. The Ducati Team rider, who yesterday came in ninth fastest, attended the circuit in the morning but returned to his hotel to rest in a bid to be fit for the third and final day.

Back on track the San Carlo Honda Gresini bikes of Marco Simoncelli and Hiroshi Aoyama continue the RC212V theme, making it five inside the top seven. Working on suspension settings to improve braking stability, an issue which has been highlighted by a number of Honda riders, Simoncelli was the final rider within a second of Stoner as he posted a 2:01.033. Aoyama, riding to find out if major changes made the day before brought any significant benefit, was fractionally over four-tenths off his team-mate.

The sole factory Ducati rider on track Nicky Hayden worked on the setting of his GP11 and set a best time of 2:02.208, with Pramac Racing’s Desmosedicis belonging to Randy de Puniet and Loris Capirossi closely matched.

Karel Abraham (Cardion AB Motoracing), who had a fall right at the end of the day, Toni Elías (LCR Honda) and Cal Crutchlow (Monster Yamaha Tech 3).