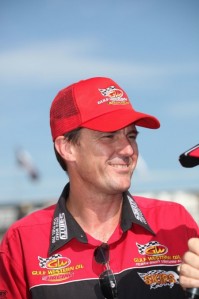 This weekend Australian racer Terry Sainty will realise a life-long dream when he lines up as part of the NHRA Full Throttle Drag Racing Series at Pomona, California.

A rookie to the National Hot Rod Association ranks, Sainty will compete with the Sydney-based Rapisarda Racing team at the Auto Club Raceway in Pomona this weekend for the Kragen O’Reilly Auto Parts Winternationals, which will run from February 24-27.

The event is part of a planned 12-event NHRA Full Throttle program for the team.

“It has been a long held dream of the Sainty family to race in the USA with our own team, however, that hasn’t been able to happen,” Sainty said.

“This is weekend is the start of the next best thing, being able to come and compete in the NHRA. My sincerest thanks must go to Santo Rapisarda and the Rapisarda Racing team for allowing me an opportunity of a lifetime.

“It’s also great to have Mum (Margaret) and Dad (Stan) here (at Pomona) with me to witness this awesome part of my career.”

Sainty and the Sydney-based Rapisarda Racing started their 2011 NHRA US tour, testing at Firebird International Raceway, Phoenix, Arizona, last weekend, and while the test sessions were rain interrupted, the team came away with valuable information for this weekend’s Winternationals.

Sainty will line up amongst a field of 20 Top Fuel dragsters, including Tony Schumacher, Antron Brown, Doug Kalitta and US based Aussie Dave Grubnic.