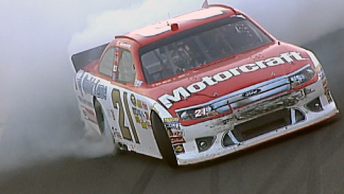 Twenty-year-old rookie Trevor Bayne has taken victory in a thrilling finale to the 2011 Daytona 500.

“I keep thinking I’m dreaming I really do,” said Bayne in Victory Lane.

“To win our first one in our second-ever Cup race is so incredible.” 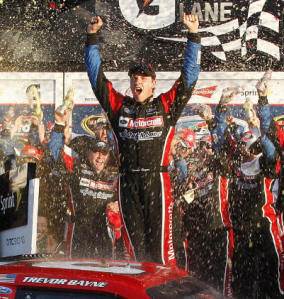 Bayne is the youngest ever winner of the 500

Bayne, who is only locked into running 17 races with the part-time team this season, is now the 500’s youngest-ever winner, having turned 20 a day before the race.

The race featured a record number of lead changes, as the ‘tandem drafting’ ensured that the 53rd Daytona 500 was like none seen before.

David Ragan (Roush Fenway Ford) led the field for the first green-white chequer restart, but was black flagged for changing lanes before the green flag.

The yellow was quickly brought out for a wreck on the backstretch that took care of Dale Earnhardt Jr’s (Hendrick Chevrolet) chances.

The ‘big one’ occurred early, when Michael Waltrip (Waltrip Toyota) turned his team-mate David Reutimann around in Turn 4, triggering a 17 car pile-up.

Waltrip had also brought out the first caution of the day on Lap 5, sending Kyle Busch spinning into the Turn 2 infield.

Richard Childress Racing suffered a tough day, with race favourite Kevin Harvick out with engine failure after little more than 20 laps had been run.

Roush Fenway Racing also lost two cars inside the first 150 laps, with Matt Kenseth spun into the outside wall in the tri-oval by team-mate Biffle on Lap 134.

Biffle had been 16 laps down at the time of the incident, and was in turn wrecked in the same place by Juan Pablo Montoya 11 laps later.

Montoya also tangled with his team-mate during the race – spun by Jamie McMurray (Earnhardt Ganassi Chevrolet), before the reigning 500 winner fell back due to a dropped cylinder.

Regan Smith had been one of the best ‘pushers’ all week at Daytona, but was taken out with just five laps left thanks to a hit from Kurt Busch on the backstretch.

Ryan Newman (Stewart-Haas Chevrolet) and Denny Hamlin (Joe Gibbs Toyota) were also involved in the shunt, while Earnhardt Jr was forced to pit due to a puncture from the debris.

Ambrose returned to the track late in the race to finish 37th.