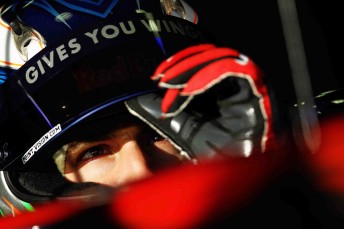 West Australian Daniel Ricciardo has starred on the third day of the Barcelona test.

The Toro Rosso test-driver completed 42 laps across a drying morning – providing his team with valuable data on the Pirelli intermediate and slick tyres.

The 21-year-old ended his stint second fastest to McLaren’s Lewis Hamilton, having headed the time-sheets for an extensive period.

“It was an interesting morning in changing conditions, especially as I was one of the first to switch to slick tyres as the track dried this morning,” said Ricciardo.

“I was pleased to be able to test a few different compounds so the day was more productive than we expected, especially in terms of learning more about the crossover point from wet to intermediate to dry tyres.”

Hamilton was third fastest, although reliability issues limited his mileage to 93 laps, compared with 139 for Red Bull (Mark Webber) and 123 for Ferrari (Felipe Massa).

Timo Glock (Virgin), Giorgio Mondini (having his first run for Hispania), Ricciardo (having not run in dry conditions) and Narain Karthikeyan (Hispania) rounded out the field.

Maldonado, Perez and Massa all caused red flags with spins during the day, while Webber brought proceedings to a close early when his RB7 stopped on the circuit.

The Barcelona test wraps up with a fourth and final day tomorrow.