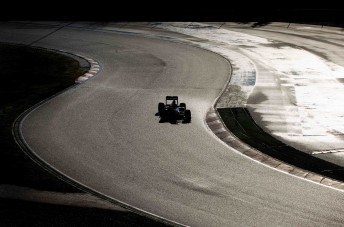 Testing can be a lonely business

Sebastian Vettel has ended the second day of testing at Barcelona as the fastest man.

The reigning World Champion, who will now hand the Red Bull RB7 over to team-mate Mark Webber for the remainder of the test, set the fastest time for the second day in a row.

Fernando Alonso was third, having suffered from Ferrari’s first notable reliability issues of the winter that saw the Spaniard stop on the circuit in the morning with an electrical problem.

Williams had a positive day with Rubens Barrichello completing 117 trouble-free laps on his way to fourth fastest.

Nick Heidfeld and Vitaly Petrov again shared the driving duties for Renault, with the German noting that the car was not as well balanced as it had been when he topped the time sheets in Jerez.

Kamui Kobayashi (Sauber) and Nico Rosberg (Mercedes) completed the most mileage for the day (125 and 131 laps respectively), with both teams reportedly focused on reliability testing.

The 2009 World Champion was just eighth fastest having spent considerable time in the garage with hydraulic issues.

Paul di Resta was ninth after a sticking throttle forced the young Scot to throw his Force India into the gravel trap, while Heikki Kovalinen rounded out the top ten for Lotus.

Ricardo Teixeira rounded out the field, the Portuguese battler auditioning for a test driver role with Team Lotus. His best of 1:31.584s was 8.3s slower than Vettel’s benchmark.