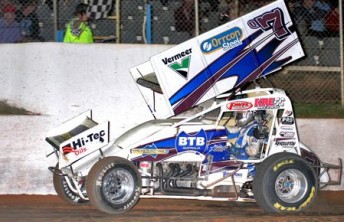 After being close on many occasions, Robbie Farr has finally been crowned the World Series Sprintcars Champion in Perth, while Max Dumesny wound back the clock to take victory in the Grand Final.

Farr – aboard the Orrcon Steel-supported East Coast Pipelines machine – went into the weekend just two points ahead of Championship rival, David Murcott – but emerged victor of the Series by 234 points. Murcott didn’t progress past the C-Main – a change in chassis overnight not assisting the Victorian’s charge.

The victory was somewhat of a hometown celebration for Farr, who is now based in Perth. The Golden West has been a happy hunting ground in the past as he won his Australian Title in Bunbury.

“I think it rates up there,” Farr said comparing the WSS victory to his Australian Title.

“Australian titles are special but this level pegs them every day of the week. The competition is getting tougher in Australia every year and to get one in the books before it gets even harder is a good thing.”

Meantime, Dumesny was happy to taste the victory champagne for the first time this season – and the first time in a long time in World Series competition.

The Sydney-sider was ecstatic to have taken the victory in the Series Grand Final.

“I’m absolutely rapt to get a win up here,” said Dumesny.

“We started out of five and knew the rubber was going down so set it up to compensate and it worked well. They (WSS) may even ask us back next year now!”

Dumesny defeated West Aussie Ken Sartori, who was on for two wins in succession, however the multiple World Series and Australian Champion blasted by him in the dying stages to take the victory.