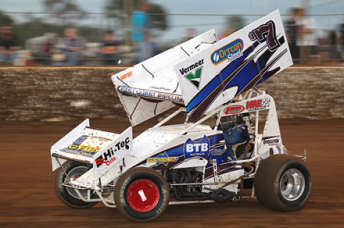 Robbie Farr has one hand on the World Series Sprintcars trophy after bringing the East Coast Pipelines/Orrcon Steel car home in fourth, while Championship nemesis David Murcott suffered with a damaged chassis during night one of the Series Grand Final in Perth.

Farr now leads the Series by 90 points with a single night of racing left. By no means is Murcott’s chance to become Champion gone, he will line up with a new chassis tonight, but will have to do better than the 11th placing in the B-Main he scored on preliminary night.

Queenslander Cameron Gessner – who shines on the wide open spaces of the Motorplex – set fastest time in qualifying and finished the feature in fifth position behind Farr.

Sartori’s team had to work hard before the A-Main rolled out, changing the magneto on his #14 machine.

“We had a problem in our last heat and traced it back to the magneto, so the crew decided to change it,” said an elated Sartori. “I’m glad they did, otherwise I wouldn’t be here now, it’s a fantastic result for the team. Quite unbelievable really.”

With just tonight left to go, the Championship is down to an exciting conclusion between Farr and Murcott. Essentially, Farr just has to keep it together and Murcott will be virtually required to go out and win the A-Main.