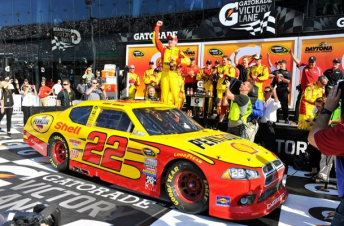 Kurt Busch added to his Daytona win tally in Duel 1

The Penske Racing Dodge driver will start The Great American Race from pole position after winning the first Gatorade Duel this morning.

The 2004 Sprint Cup Champion was pushed to the win by Regan Smith’s Chevrolet, in a race that again saw drivers pair up from the outset.

The second Gatorade Duel was taken out by Jeff Burton, who drafted with Richard Childress team-mate Clint Bowyer throughout the race.

Duel 1 saw Kevin Harvick and Matt Kenseth work together to take third and fourth, with the Ford driver proving able to ‘push’ his Chevrolet rival for long periods without overheating.

The superior cooling on the Ford FR9 engines was underlined in Duel 2, where Roush team-mates Carl Edwards and Greg Biffle ran line astern while the Chevrolet, Toyota and Dodge pairs were continually forced to switch positions.

Having watched Duel 1 from the garage, Jeff Gordon ensured he had a Ford ‘pusher’ for his Duel, working with 19-year-old rookie Trevor Bayne for the entire race.

The duo continually fell back on restarts however, and ended up making contact on the run to the chequered flag while battling within the top 10. Gordon, Bayne and David Ragen all sustained damage in the incident.

While Gordon only made light contact with Bayne and the outside wall, it is not known whether he will need a back up car for the 500, which could push him from the front-row to the back of the grid.

Joe Gibbs Racing team-mates Joey Logano and Denny Hamlin will start the 500 further down the field than they’d like, having been taken out of contention in Duel 2 during separate incidents.

Logano made heavy contact with the inside wall in the tri-oval after a nudge from Michael Waltrip, while later Hamlin endured similar contact from Kyle Bush in the third Gibbs entry, sending the FedEx Toyota spinning out of Turn 2.

Brad Keselowski also brought out a caution when he was turned by Todd Bodine.

While Bodine was later involved in another incident with Steven Wallace with just five laps remaining, Brad Keselowski ensured Brian Keselowski will make his maiden Daytona 500 appearance on Sunday, pushing his older brother into one of two coveted ‘transfer spots.’

Third place for Waltrip also saw the #15 NAPA entry race its way into the 500, while Travis Kvapil and Dave Blaney make it in on speed.

Duel 1 saw JJ Yeley and Bill Elliot race their way in, with the former receiving crucial help from Marcos Ambrose.

The Australian, who complained of a vibration inside the final 10 laps, finished 21st in Duel 1.

Dale Earnhardt Jr finished eight spots up the road in 13th, after losing time waiting for his drafting partner Mark Martin to catch him late in the race.

After winning the pole position in qualifying, Earnhardt will start the 500 from the back of the field, having wrecked his race car in Wednesday practice.

*Earnhardt Jr will drop to the rear of the field due to switching to a backup car. The entire inside lane will move up, meaning that Kurt Busch will lead the field to the green flag.