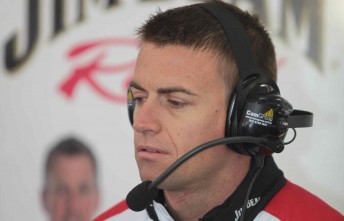 After Marshall was finished with Formula Ford in 2002, he graduated straight to Carrera Cup, finishing second in the title behind inaugural series champ Jim Richards.

From there, Marshall dabbled in Fujitsu V8s, Champ Cars and other classes before competing in V8 Supercars in 2006 and 2008. In 2009, he helped set-up a new V8 team before the owners went broke.

While his racing career hasn’t been as consistent or successful as he’d like, Marshall remains a threat, and if he can finalise a deal to race in Carrera Cup this year, he will automatically become one of the front-runners.

Speedcafe.com.au’s Grant Rowley spoke with Marshall about Carrera Cup and setting himself up for a plumb drive in the V8 Supercars endurance races …

SPEEDCAFE: You’ve been eyeing a return to Carrera Cup for a while. How close are you to locking it in?

MARCUS MARSHALL: It’s pretty much ready to go, I just need to get the final OK on sorting out our sponsorship. We’re pretty close. Everything is ready to go in terms of the car and the team.

SPEEDCAFE: Where would the car be based?

SPEEDCAFE: How close are you on the budget side of things?

MM: We’re very close, but it’s not done until it’s done. It’s a lot closer than this time before Christmas!

It’s all looking pretty good, but these things are never 100 percent. It’s just a matter of ticking all the boxes. We’ve still got until the Grand Prix in March, which gives us a little while.

SPEEDCAFE: If it all goes ahead then, it will be a good class for you to get back into and something that you have past experience in …

MM: Yeah, that’s for sure. With my previous experience, I started in 2003, that was great. I was launching my career in a higher profile class, racing against Jim Richards. It was always good close racing. Everyone gets the same equipment, other than some small engineering things, it’s all down to the driver. It’s the fairest shot I’m going to get at winning races in Australia.

SPEEDCAFE: Craig Baird is clearly the benchmark for the series. Are you confident that you’ll be able to take it up to him?

MM: Yeah, definitely. I’m going to be a little bit rusty, but I’ll just need to get the WD40 out, spray it under my arm pits and we’ll be good to go!

I think after a couple of test days, we’ll be OK. Bairdo will have a headstart on everyone, but I’d like to think that we can hit the ground running and be real strong. I’m confident that we’ll be able to take it up to Craig, for sure.

SPEEDCAFE: Doing Carrera Cup will be good preparation for the V8 endurance races. You drove with Steve Johnson (Jim Beam Racing) last year. How are you looking for a deal?

MM: I’m weighing up my options. I’m looking for the best place to win races and win Bathurst. That’s obviously a big ask, but I think I have as good of an opportunity as anyone else. Someone has to go out there and knock off TeamVodafone.

I have options. I’m just weighing them up for the time being. I’m in no rush.