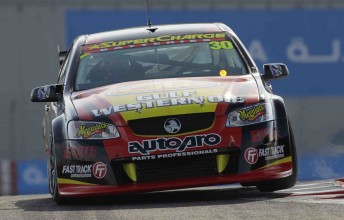 Lucas Dumbrell Motorsport will move into a new purpose-built factory in the coming months as it prepares to expand its racing operations.

The single-car V8 Supercars team is relocating from its 500 square metre workshop in Nunawading, Victoria, to a new location, just around the corner, but into a 1200 square metre facility.

LDM’s new workshop will be attached to the new warehouse for Automotive Brands – the owners of Autobarn and Autopro automotive stores.

Lucas Dumbrell says that the new shop will be fit out for multiple cars as he plans to double his racing fleet in 2012 to include a Fujitsu V8 Series entry.

“I’m taking out a portion of one of the new warehouses. We’re putting walls up so it will be completely separate. There will be no access to the rest of the Automotive Brands section,” Dumbrell told Speedcafe.com.au.

“And it will be purpose built for our team.

“We’ll have our own sub-assembly area, the truck will fit perfectly in there. We’re also building a spare parts room, tyre area and we’ll have five offices as well, including a meeting room. Every aspect of the new place will be bigger than what we’ve currently got.

“The place I’ve got at the moment is good, but we were always going to move. When we started the team, it made sense at the time.

Dumbrell confirmed that his intention is to run more V8 Supercars in the future.

“I’ve only got one hoist in my current shop. When we move into the new place, I’m putting in two hoists straight in,” he said.

“I have aspirations to run a Fujitsu Series car next year. When we get more workload, we’ll need the space. Instead of the builders coming in later, we’re just going to get it done straight away and wait for the team to expand later on.

“I definitely want to do a Fujitsu program. All of the parts can be shared between each car.

“If someone came to me with a Carerra Cup car or a V8 Utes, I’d be happy to look at that as well, but a Fujitsu car makes the most sense.”

Dumbrell plans to move his team into its new workshop by mid-April.